On this occasion, the Chief Minister Hafiz Hafeezur Rahman paid rich tribute to martyrs of 1965 war. He Said the battle was fought valiantly. The Nation unitedly stood in one row to face the enemy. India interfering in our internal affairs. Terrorism that has been imposed up on us. 7000 Soldiers have given their lives to save Pakistan including two Lt. Generals, 3 Major Generals, 22 Brigadiers and about 75000 people have given sacrificed their lives and Pakistan has to bear 156 billion dollars loss. Pakistan is the country of all those sects and languages speaking people who are living in Pakistan.

Prof. Dr. Khalil Ahmad said that enemy has the pride of having more manpower but we had the support of Allah so we have defeated the enemy in all fields of battle.

Mr. Nusrat Mirza said that Pakistan’s has not only stopped the sudden aggressive attack of India but ruled over sea and air. The Chuwinda battle, the largest tank battle after World War II was fought inflicting heavy loss to enemy. All objectives of enemy failed. This could have not happened without the support  Almighty Allah.

Col. Abaidulla speaking on this occasion described the aggression of India in Lahore, Sialkot, Qasur and Head Sulemanki sectors and mentioned how bravely the battle was fought by our soldiers. The soldiers of Gigit and Baltistan had awarded many medals in recognition of their bravery.

Defense Analyst Ahmad Khan speaking in the seminar said that Enemy is afraid of nuclear deterrence. India did attack in 1965 war and was heavily punished. Our atomic program though in defense of Pakistan. But we are also ahead of many countries in civil nuclear technology. Pakistan is doing good job in the fields of energy, health, agriculture and other fields. We are at 18th number among 23 strong countries. In producing atomic energy a few power plants are working; Kanupp, Chashma 1, 2, 3 and 4.  While K2 and K3 shall be operational in 2020 and 2021. These two nuclear power plants shall provide 2200 MW electricity, however, by 2030 we need 8000 MG electricity so that our people and industry’s requirement is fulfilled. The speaker said Pakistan is also working on the project to produce sweet water seawater.

Prof. Muhammad Ramzan said the armed forces defend the borders and the people defend the ideological borders. Our armed forces have written the history of gallantry in 1965 war.

Prof. Munir Kazmi has scholarly described how 1965 war was Fateh e Mubeen. He given references of history of Spain and other and very impressively proved that we got Fateh e Mubeen in 1965 war.

Prof. Iftekhar Ali has made a claim perhaps true that all people and communities have some or the other pride but we have the honor that we fought the battle against Dogra Raja and won and then included Gigit Baltistan in to Pakistan. By virtue of this deed if people of Gilgit Baltistan claim that they are super patriot, will not be wrong.

The students of the University sung milli nagmat and poems for Pakistan. The seminar was a great success. 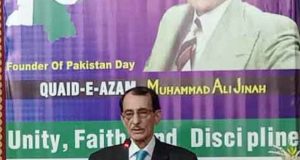 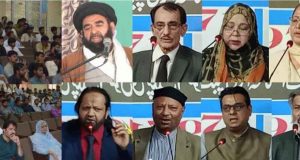 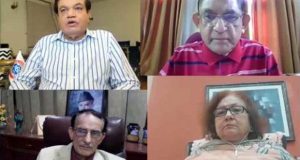