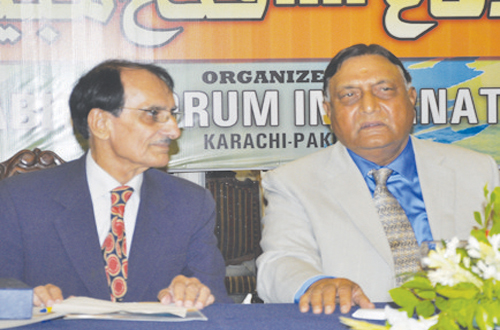 The speakers described different aspects of  6th September 1965 war  that Pakistan controlled Indian Air space and Sea and in land war India was contained in such away that it could not achieve their goal of attack. Chuwanda tank battle was biggest tank battle after World War II that India was humiliated.  The losses of India were much more than Pakistan. Chief Guest general Moinuddin Haider recalled how the battle was fought. Commodore ® Obaidullah mentioned how Dawaka the Indian base near Bombay was destroyed. Air Commodore Nizamuddin narrated the story of five Indian planes were shot in a minute time. Prof. Dr. Mutahir Ahmad was reminded the level of unity among the people of Pakistan. Nusrat Mirza in his speech mentioned the new challenges such as nuclear, laser, cyber, biological, chemical and unnatural disasters that have emerged after 1965 war. According to him Pakistan has prepared itself for all the challenges. New battle is the entry in the Nuclear suppliers group (NSG).Pakistan qualifies to be the member of this group as it is incompliance of NPT equivalent standards. The Seminar was attended by large number of students, Professors, elite and all walk of life. The Milli song were sung that filled audience with emotions and spirit of nationalism.