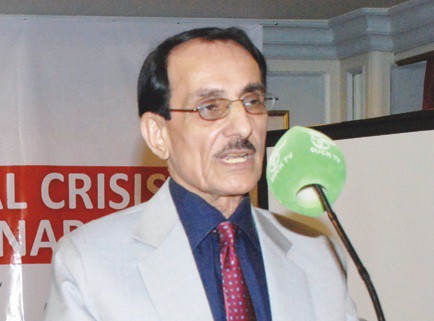 In a workshop “Pakistan’s Political Crisis in the world Scenario” , organized by Rabita Forum international, the participants mostly professors, diplomats, intellectuals and journalists have unanimously condemned the brutal and most cowardly act of killing innocent children in Peshawar’s Army Public School. The participants called up on all sects, groups of the society, including Ulmas together with all political parties to condemn this inhuman act. They should be declared coward and non-Muslims. No religion allows such acts. The participants supported the operation against the terrorists and demanded to enhance the efforts to curb the activities of terrorism. Those who participated in the workshop were Nusrat Mirza chairman Rabita Forum Ambassadors Mansoor Alam, Zahid Hussain and G.R.Bloch and among professors Tahir Massood, Head of Department Mass Communi-cations Karachi University, Dr. Shujaat Hussain, Political Science Department Karachi University Dr. Mahmboob Hussain Muqadam, Political Science department Karachi University, Dr. Shahida Wizarat Director Research Department of IOBM, Ms. Bismah Mirza IOBM, Tariq Shadab, Imtiaz Khan Faran President Press club Karachi Zafar Imam Advocate and Kanwer Khalid. The participants also observed that world scenario is changing very fast. The dominant countries are trying to increase their influence in world. The new power centers are emerging and power tussles has been increased to the critical level, while Pakistan has been kept busy in internal power struggle. There is immediate necessity that Pakistan  plays its roles in global power game and should find its place in the New World Order, if any. Nusrat Mirza in his welcoming address said the world is changing very fast. New power  centers are emerging and Pakistan has been kept captive of the internal situation.  Pakistan has not been allowed to play its role in the geopolitics.  Ambassador Mansoor Alam, Prof. Dr. Shaishta Wiazarat were of the view that the enemies of Pakistan  are after our Atomic program and it seems that Taliban may  try to blackmail the west that it can attack western countries. Ambassador Zahid Hussain said that Pakistan should overcome its internal crisis through rule of law, good governance and ensuring peace to the people of Pakistan and then Pakistan can play role in geo-politics. Dr. Tahir Masood said that democracy is the only way that we can overcome the problems. Dr. Shujaat Hussain was of the view that every individual should play its role honestly. Prof. Mahboob Hasan Muqadam elaborated Pakistan’s successive governments which has deprived Pakistan’s moving forward to progress. Kanwer Khalid presented the vote of thanks while Zafar Imam Advocate conducted the proceeding of the workshop. 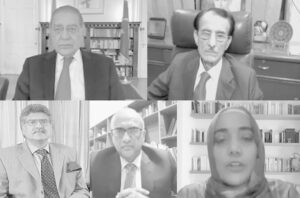