Islam is complete code of Life

By sending his ambassadors to Africa and other places, Prophet Muhammad (Pbuh) outlined the principles of Diplomacy (Syed Hussain Habib)

Islam has strict principles to determine the election of head of state; head count is not important (Dr. Zahid Ali Zahidi)

Prophet Muhammad (Pbuh) preached peace by prevalence of justice. He taught his followers to raise voice against injustice and induced discipline by establishing the system of Namaz (Prayers). By way of abiding the principles of Islam we can establish the state of Madina. Quran highlights military principles and establishes that prayer (dua) needs to be backed by action. Treaty of Hudaibiya served as a conquest as it was a silent strike to break the unity of the enemy and serves as a great example for us today.

Islam highlights strategic policy in many ways, the defeat of Abraha’s elephant army by way of Ababeel points towards the effective use of strategic weapons and it is no coincidence that the towers of mosques resemble the shape of a missile. The incident of Karbala and the sacrifice of Imam Hussain (r.a.) provides a new perspective to the defensive policy of Islam.

Islam emphasizes the use of a political system to organize the state. Not everything is to be imposed by use of force but greatest emphasis is on the system of consensus (of intellectuals). Sometimes the sword must be used and other times it must be avoided. In Islam the supreme governance is of Allah

Islam preached the concept of peace and prosperity. It is a complete system covering every facet of life from economy to social dealings everything is covered.

Islam talks about changing the system and changing leadership. Islam is the system formed on the principles of Allah. It places emphasis on the importance of intellectuals and not on headcount.

Islam preaches distribution of wealth. System of economy as highlighted in Islam is completely in balance. Socialism had a higher role of the government while capitalism is completely focussed on wealth and its acquisition. Islam commands Muslims to spread on earth in search of employment. Anything which is in excess of one’s needs should be spent in the way of Allah. Accumulation of wealth results in restrictions such as Zaka’at. Basic needs of housing, hospitalization, clothing, food are the responsibilities of the state in Islam. Business by means of deceit and theft is unlawful and interest is strictly prohibited. Gambling, prostitution as business and drug business are considered as serious vices.

Prophet Muhammad (Pbuh) emphasized the need for a systematic approach. He created the first school for Learning Quran, Sunnah and hadith to facilitate those who sought education. In today’s modern world the practices and moral values of the Prophet (Pbuh) provide complete solution to all our problems

Islam promotes a just and fair system. The decision of the stolen reigns of Hazrat Ali’s (r.a) horse went in the favour of the Jew who had bought the stolen reigns and against Ali (r.a)  and this impressed the Jew into accepting Islam. Pakistan’s system, unfortunately is not fair or just and this is has created serious problems 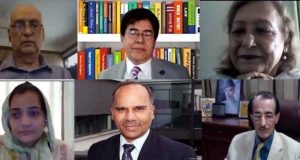